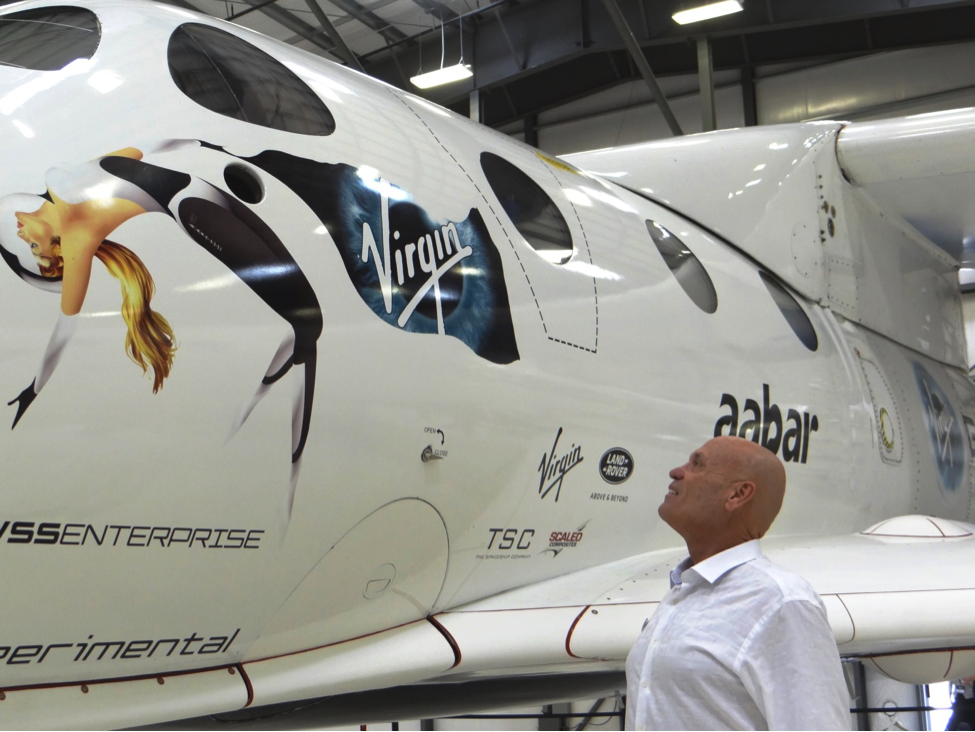 Good afternoon dear readers and welcome back to kenbaxter.com!  I am Ken Baxter of Las Vegas and today is Friday, October 24th, 2014.  I hope you’ve all had a wonderful week!  Now if you know anything at all about Ken “Rocket Man” Baxter, you know that one of my most exciting endeavors is an upcoming spaceflight on Virgin Galactic’s SpaceShipTwo as the first ticketed commercial space tourist.  I would be honored to be chosen for the Maiden Voyage of VSS Enterprise!  Rocket Man has his sights on blasting off with Sam, Holly, and Sir Richard as part of the Virgin Galactic Family.  Whether I am on that rocket or the very next, I am elated to know that even though the wait for the first commercial suborbital space flight has been long, the prize shall be one of the most rewarding in history!

Speaking of prizes, I recently returned from a historic visit to Mojave Spaceport in Mojave, California, the current home of Sir Richard Branson’s Virgin Galactic spaceship, VSS Enterprise.  During this monumental trip, on October 4th, 2014, the original First Founders of Virgin Galactic, along with Sir Richard Branson himself, were in attendance to commemorate the 10th Anniversary of SpaceShipOne’s triumphant Ansari X Prize win!

On this remarkable occasion, as First Founder, I received an exclusive invitation from Virgin Galactic to participate in the momentous anniversary celebration!  During the event, Sir Richard took part in a lively panel discussion with Burt Rutan and several other key players.  Mr. Branson also continued preparations for his own spaceflight with some G-force training by means of an aerobatic flight, piloted by Chief Pilot Dave Mackay.  Along with a lovely dinner and reception at Mr. Rutan’s beautifully designed home in Mojave, I also got to catch up with the other First Founder Future Astronauts and share in our delight at moving closer to space flight!  A very nice celebration was had by all, as well as time well spent reflecting on the many accomplishments thus far by Virgin Galactic and all the folks who made the glorious X Prize win possible 10 years ago with SpaceShipOne!

If you recall, the Ansari X Prize spaceflight competition challenged aerospace teams from around the world to build a reliable, reusable, privately financed, manned spaceship capable of carrying three people 62 miles (100 kilometers) above the Earth’s surface twice within two weeks. Amazingly, twenty-six teams from seven countries competed for the prize, investing more than $100 million in research and development.

In a feat that remains unmatched, aviation designer Burt Rutan’s Scaled Composites and Microsoft co-founder and billionaire Paul Allen’s Mojave Aerospace Ventures used its White Knight aircraft and SpaceShipOne rocket ship to make their historic second trip to space on October 4th, 2004 and claim the $10 million X Prize, making aviation history!  It is interesting to note, SpaceShipOne now hangs in the Smithsonian National Air and Space Museum, as a monument to the ingenuity of those who push the limits of human space flight.  Soon after their pivotal accomplishment, Richard Branson partnered with Burt and his winning team at Scaled Composites to craft a fleet of space vehicles for Virgin Galactic with the idea of bringing space travel to the public.

To date, there have been 54 flight tests for SpaceShipTwo and there are projected to be up to 100 tests in total before the First Founders make their journey to outer space from Spaceport America, the future world headquarters of Virgin Galactic, located near the town of Truth or Consequences in New Mexico.  In fact, Richard Branson recently noted, in an October 18th interview with Henry Blodget at Business Insider, that he was ready to start the final set of test flights right before Christmas.  “Earlyish next year, I’ll be going to space with my kid Sam,” says Richard, “and then we’re going to start a whole new era of sending people to space.  We’re building our own spaceships shaped as airplanes. That means that one day we’ll be able to transport people across the earth in spaceships.”

While Richard is ready to move forward with his plans to begin commercial space travel service as quickly as possible, he is also careful to remind himself of the associated risks.  “I’m not going to take Sam to space until we’re 100% sure that we’ve got it right.  And that’s why the program has taken three years longer than we’d hoped,” he offers, “but I’m not going to put him up there or our customers up there until we really feel we’ve got it absolutely right.”

Sir Richard’s many forward thinking goals are not without criticism.  He also responded to a jab from friend and fellow entrepreneur Elon Musk of Tesla fame.  Also founder of hugely successful SpaceX, a spacecraft development firm, Musk has already designed, manufactured, and launched the first commercial spaceship to successfully attach to the International Space Station and return cargo to Earth.

During a recent Management Today interview, Branson reportedly said he had visions of building hotels on the moon.  While Elon is an admirer of Richard’s, it seems he also has a bit of competitive jealousy to contend with.  When asked if he was thinking bigger than Branson or vice versa, he told MT, “He did name his firm Virgin Galactic. That’s pretty big. It’s a bit like your name is giant and you‘re actually quite small. I like Richard and I think he’s doing some cool things, but technology is not really his whack you know?  But once the technology is developed, in terms of operating it in a way that people really like, I think he’s quite good at that.”

While Richard may not be the technological genius that Elon Musk asserts himself to be, he knows exactly how to get things done without worrying over a little criticism here and there.  “A little rebellious spirit can help you follow your own dreams rather than be stuck trying to meet others’ expectations, he wisely relates, “These are good instincts, not mere youthful foolishness.  When you love what you do, you are a lot more likely to succeed.”

Legendary success is clearly on the horizon for Sir Richard’s team and very soon indeed.  Once the final flight tests are completed at Virgin Galactic, the next step will be carrying the First Founders on their initial voyages to outer space.  The duration of the commercial flights aboard VSS Enterprise will be approximately two and a half hours, with just a few short minutes of that spent experiencing the wonder of the cosmos.  Two pilots and six passengers will reach altitudes of over 62 miles above the Earth, where we will achieve weightlessness and then return safely to terra firma via runway landing at Spaceport America.

On behalf of all the Future Astronauts at Virgin Galactic, and I’m sure they won’t mind me saying so, we wish Richard and his team the best in the remainder of the flight tests of SpaceShipTwo and we enthusiastically look forward to punching our tickets at the counter of the world’s first commercial space line!  Congratulations to the Rutan/Allen team and all those who made the X Prize win possible and best wishes to Richard Branson, Virgin Galactic, and the many innovators, including Elon Musk at SpaceX, who are making private space travel a real, tangible achievement.