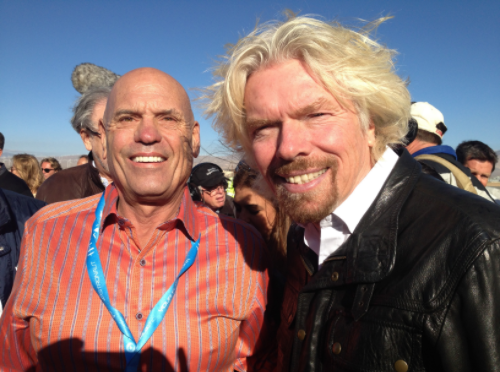 Good afternoon dear readers and welcome back to www.rocketmanlv.com!  This is Ken Baxter of Las Vegas and today is Thursday, January 7th, 2016.  I wish you a great, prosperous,blissful, healthy, bright, delightful, energetic, and extremely Happy New Year!  As we recently closed the chapter on 2015 and are now entering what promises to be a stellar 2016, I’d like to revisit some defining Virgin Galactic milestones from the last twelve months and take a look towards some exciting moments yet to come.

As you know, I’m honored to be the First Founder and future astronaut of Virgin Galactic, having been the very first to purchase a ticket aboard the commercial space vehicle, SpaceShipTwo.  Back in 2004, as I watched a 60 Minutes news story documenting the Ansari X Prize, it was with considerable excitement that I first heard of Sir Richard Branson’s endeavor in commercial space tourism.  The following Monday, I had my secretary call Virgin Atlantic to get ahold of him.  When Richard called back, I knew I was going to realize my dream of going into outer space.

Over the last twelve years, looking back upon Virgin Galactic’s many successes, it is also impossible to forget its’ most tragic loss.  Asyou may recall, sadly on October 31st, 2014 VSS Enterprise broke apart in the air during a powered test flight over California’s Mojave Desert.  Even though the flight began smoothly about two minutes after the plane was released from its mother ship, WhiteKnightTwo, the feathering mechanism deployed too early resulting in what appeared to be an explosion in mid-air; injuring pilot Peter Siebold who was ejected from the plane and fatally wounding co-pilot Michael Alsbury.

It was a horrific day for all those emotionally invested in Virgin Galactic’s mission, not to mention the rest of the world.  It seemed in an instant all hope was lost for the foreseeable future of commercial space travel.  CEO George Whitesides announced in a news conference following the incident, “Space is hard and today was a tough day.”  But Virgin founder, Sir Richard Branson, ever committed though with a heavy heart offered a solemn message, “We do understand the risks involved and we are not going to push on blindly – to do so would be an insult to all those affected by this tragedy.  We are going to learn from what went wrong, discover how we can improve safety and performance and then move forwards together.”  Later, an NTSB investigation determined the crash was due to human error and could have potentially been avoided with more rigorous testing, training, and careful design.  The contribution and sacrifice of the two test pilots will never be forgotten and was not made in vain.

After several months and much anticipation, January 2015 introduced new found hope and a new beginning for the Virgin Galactic space venture.  Following the demise of the first iteration of SpaceShipTwo (VSS Enterprise), Sir Richard Branson and partner The Spaceship Company, announced that development of a second SpaceShipTwo, nicknamed VSS Voyager, was underway.  Ina blog posted on Virgin Galactic’s website in mid-January, Sir Richard shared an extraordinary video documenting round the clock efforts to rebuild and re-launch Virgin’s space line; a glorious achievement considering the hardships they strove to overcome.

In February, Virgin Galactic again made headlines when Branson announced the development of LauncherOne – a program to launch small satellites into space and expected to debut in 2016.  The two-stage orbital launch vehicle is crafted to send commercial and governmental satellites weighing 500 pounds or less into space.  Much like SpaceShipTwo, LauncherOne was designed to be sent aloft from WhiteKnightTwo, giving customers the ability to avoid crowded, expensive launch ranges at its prime Long Beach Airport location along the Southern California coast.

With the development of LauncherOne flourishing nicely and the six month anniversary of VSS Enterprise’s 55th and final test flight now behind them, Virgin announced a major landmark for the latest SpaceShipTwo in mid-May.   “Weight on Wheels” as it’s known in the aerospace industry, meant the spacecraft was finally lowered onto its landing gear for the very first time; an important step indicating the ship could now be fitted with its avionics and electrical systems and move ever forward towards its goal of commercial spaceflight.

As we’ve come to understand the importance and significance of all the incremental technical and mechanical advances contributing to such an enormous undertaking as human space tourism, we must also recognize the extraordinary bravery and skill necessary to safely guide not only the space planes but the passengers aboard.  On June 9th, 2015, Virgin Galactic and Chief Pilot Dave Mackay introduced us to the elite pilots tasked with this immeasurable feat.  Mike Masucci, Frederick “CJ” Sturckow, Mark Stucky, and Todd Ericson, along with another pilot announced later in November, Col. Kelly Latimer – all with considerable military, commercial, and test flight experience ranging from F-16’s to the Space Shuttle. These capable professionals will forge the way for safe testing of Virgin Galactic’s SpaceShipTwo and well beyond.

Later in the month of June, another strategic advance was made for LauncherOne, which signed a contract with OneWeb, a company striving to provide affordably priced internet connectivity to the world by eventually orbiting a constellation of 720 satellites capable of reaching hundreds of millions of users; even those residing in places without existing internet access. Virgin Galactic has been hired to perform thirty-nine satellite launches and an option for 100 more, marking the possibility of a truly global internet.  Several months later, in October 2015, LauncherOne won another prized contract; this time with NASA, which will send more than a dozen satellites into orbit for America’s space program.

Nearing the end of 2015, Virgin Galactic eagerly welcomed the most recent edition to the Virgin Galactic fleet with the introduction of “CosmicGirl”, a former Virgin Atlantic commercial 747 jet aircraft now dedicated wholly to the advancement in satellite launching technology facilitated by LauncherOne through its mission to open space for the benefit of life on Earth.  Due to the high levels of demand on WhiteKnightTwo, Branson and his Virgin Galactic team soon realized that one carrier aircraft would not be enough to provide the best, most flexible service to its commercial passengers and business clients, therefore making the new addition an obvious choice.

In the New Year, as Virgin Galactic’s First Founders continue to wait patiently for their chance at an unparalleled view of Earth from outer space, we are set to witness another monumental advance towards the realization of our dream – the unveiling of the completed SpaceShipTwo 2.0!  Virgin Galactic, Sir Richard Branson, and the Astronaut Relations Team will host an exclusive and much anticipated event to roll out and christen the newly completed vehicle at the Mojave Air and Space Port in California on February 19th.  Also expected to attend is the great theoretical physicist and cosmologist, Stephen Hawking.  Branson has honored Professor Hawking with the only gifted ticket aboard the space ship; recognizing his considerable contribution to science and his continued enthusiasm and advocacy for the democratization of accessing outer space for the benefit of our planet.

I certainly can’t wait to see what the coming months will hold for Virgin Galactic and for all the future astronauts.  Keep checking back at http://www.rocketmanlv.com to keep up on the latest updates from your Virgin Galactic First Founder “Rocket Man” Ken Baxter!  I’ll be sharing more very soon, including the new name for SpaceShipTwo, following the February unveiling.  Cheers everyone – here’s to an extraordinary 2016!

Thanks for visiting my blog – Ken Baxter Las Vegas