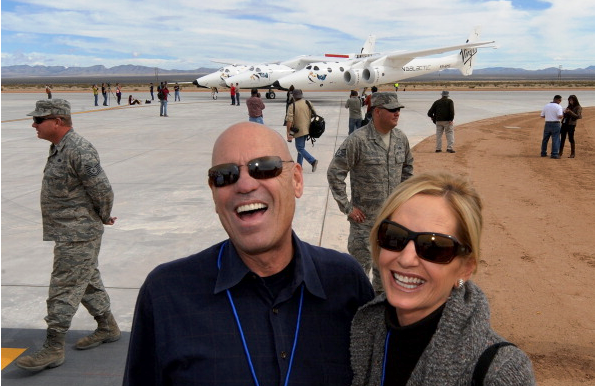 Good morning dear readers and welcome back to kenbaxter.com.  This is “Rocket Man” Ken Baxter of Las Vegas and today is Friday, April 24th, 2015 and what a beautiful sunny day it is here in the Southwest!  I was just looking back this morning on some of our recent blog posts from Made In America and Green Global and realized that we have been discussing some very serious stuff over the last month!

From a critical analysis of the costs and benefits of nuclear power to the controversial dialogue about the completion of the Keystone XL oil pipeline here in America, we have had our noses to the grindstone working hard to bring you the most updated, compelling news stories affecting the world today.  Despite our resolve to bring you the most contemplative, valuable insights into our planet’s most pressing issues, even we know that sometimes you just have to have fun!  So with that said, today I’d like to BOLDLY go where no man has gone before – well you get the idea –  and venture outside our stratosphere to share with you some of the most entertaining intergalactic developments from around our solar system and beyond.  Happy “Fun Friday” everyone!

If you’ve kept up with social media lately, you’ll know that there’s been a lot of fascinating space news orbiting the internet over the last few months.  For instance, blasting off on NASA’s Twitter feed on Thursday, a beautiful cosmic photo of stellar cluster “Westerlund 2” was released as the official image of the Hubble Space Telescope’s 25th Anniversary.  An awe-inspiring picture filled with crystal-like multicolored dust and thousands of jewel-like stars sent the celebration viral.  John Grunsfeld, astronaut and associate administrator of NASA’s Science Mission Directorate, said in a statement from NASA, “Hubble has completely transformed our view of the universe, revealing the true beauty and richness of the cosmos.  This vista of starry fireworks and glowing gas is a fitting image for our celebration of 25 years of amazing Hubble science.”  Since most of us will never be able to SnapChat our friends from the outermost reaches of space, you can visit the cluster nearly 20,000 light years away from Earth by checking out this amazing video tour: http://www.space.com/29199-fly-through-a-3d-city-of-stars-to-honor-hubble-video.html.

Also in the news, on April 14th SpaceX’s Falcon 9 rocket ship and Dragon spacecraft successfully lifted off from Cape Canaveral Air Force Station on the eastern coast of Florida to begin SpaceX’s CRS-6, the private spacecraft’s sixth official mission to re-supply the International Space Station for NASA.  Making the journey with over 4,300 pounds of supplies and payload, Dragon spent 2.5 days travelling to its destination and finally docked at ISS on April 17th.  Following its successful launch, the Falcon 9 rocket

attempted a precision landing aboard SpaceX’s autonomous spaceport drone ship “Just Read the Instructions” to determine if landing and recovering a first stage rocket booster after its primary mission would be possible.  The rocket did successfully reach the drone ship, but unfortunately excess lateral velocity caused it to tip over and become unrecoverable.  SpaceX says its next landing and recovery attempt will occur during the CRS-7 mission targeted for June 2015.  Hopefully it will avoid another “close, but no cigar” style landing.

If you weren’t able to catch the excitement of the rocket launch earlier this month, I hope you were able to see another exhilarating show that transpired in the wee hours yesterday morning!  Yes, my friends, the yearly Lyrid Meteor Shower peaked in the northern hemisphere, providing an engaging spectacle as the meteors burned up while streaking through the sky.  If you missed it, the next and most popular meteor shower visible above the Equator, the Perseids, can be viewed from July 13th through August 26th and is expected to be most brilliant in mid-August, providing a solid alternative to the less than stellar summer TV programming.

In otherworldly news, the latest Martian report from this morning indicates that NASA’s Mars Reconnaissance Orbiter (MRO) captured an image of a “curious” car-sized vehicle trundling through the foothills of 3.4 mile high Mount Sharp.  Alas, it was none other than the space agency’s Curiosity rover continuing its investigation for water, microbial life and planetary habitability.  Reports are still inconclusive, but NASA believes they may have found proof of life on the Red Planet since the rover’s CD player was recently stolen.

Speaking of rovers, another of the world’s space programs just announced their intentions to put an unmanned vehicle on the surface of the moon by 2018.  Joining an elite few who have explored Earth’s satellite, Japan Aerospace Exploration Agency (JAXA) is planning to use its Epsilon solid-fuel rocket technology to carry and deploy a SLIM (Smart Lander for Investigating Moon) probe to perfect soft-landing technologies which could aid in future manned expeditions.  The advanced technology aboard SLIM includes the ability to use face recognition software found in digital cameras and smartphones to enable the craft to recognize craters on the surface.  Hopefully it won’t get too wrapped up taking “selfies” to complete its intended mission.

Closer to home, NASA is currently investigating the “Four Corners Mystery”, a phenomenon located at the intersection of four southwestern states; Colorado, New Mexico, Utah, and Arizona. Scientists reported on April 9th that the levels of methane gas in the region are exorbitantly high resulting in a thermal “hot spot” visible from satellites in space.  Methane, a greenhouse gas capable of trapping heat in the earth’s atmosphere is the second most prevalent one emitted in the U.S. from human activities aside from Whoopi Goldberg’s notorious gaffe on “The View”.

Finally in related news, Sir Richard Branson, fellow space enthusiast and founder of Virgin Galactic announced earlier this month that he will be moving the U.S. operations of his Virgin Group to the heartland city of Branson, Missouri.  He has promised to begin flying his Virgin Atlantic airline to and from the resort town and also will begin construction on a new luxury resort in the area.  Along with a multitude of other offerings, his water filtration company, Virgin Pure, will triple-filter the town’s water and his health club chain, Virgin Active, will cater to the country-themed town by hosting a new workout program featuring hay bales and wagon wheels.  You can see Sir Richard’s special announcement with Branson’s mayor Raeanne Presley, here: http://www.virgin.com/richard-branson/virgin-moves-to-branson-missouri.  Now if you believed that, you were definitely April Fooled by Sir Richard, a notorious prankster!

Alas, it’s all in good fun my friends!  As the First Founder of Virgin Galactic and first ticketed space tourist aboard SpaceShipTwo, I have had the distinct pleasure of spending time with Sir Richard and can attest that he is very kind, smart, and funny gentleman.  Though he has been through some rocky times during the crash of the first space vehicle back in October of last year, we can see that he maintains his sense of humor and remains steadfastly committed to the completion of the second incarnation of the spaceship.  In a recent Virgin Galactic video update, SpaceShipTwo’s progress has been documented for all to see.  Once you watch, you’ll know why I am very much looking forward to joining the maiden voyage to outer space in the very near future.

For more information about my upcoming flight to outer space with Virgin Galactic, you can visit me at www.rocketmanlv.com.  For all the latest news on this planet, please check out my main page at:  www.kenbaxter.com.  I hope you all have a great, fun-filled weekend and remember not to take life to seriously and enjoy every single moment!

MADE IN AMERICA: SUPPORTING OUR VETERANS, OUR TROOPS, AND OUR COUNTRY