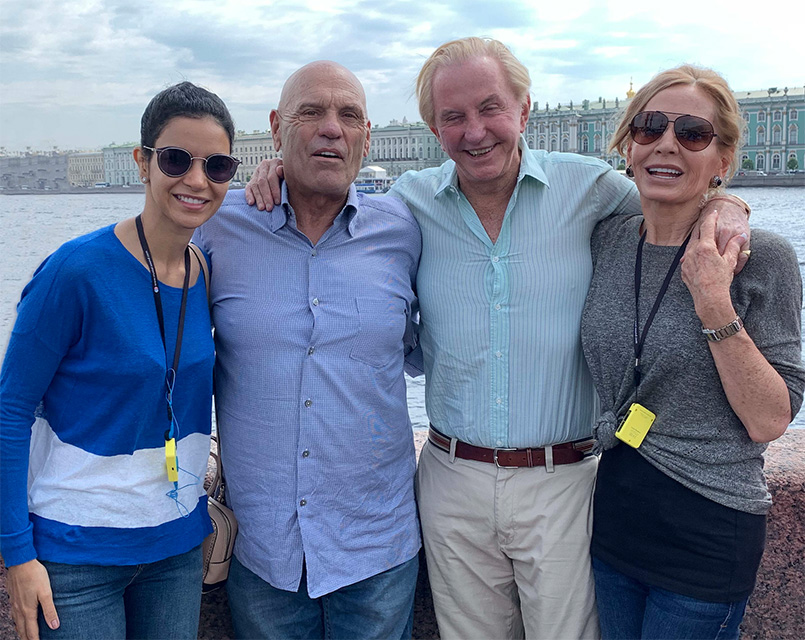 Hi, Ken Baxter here from fabulous Las Vegas, Nevada. I am pictured here with my lovely wife Linda and my good friend Geoffrey Kent and his wife Vi of the incomparable Abercrombie & Kent luxury travel agency.

Geoffrey grew up in the travel business his parents began; you might even say it is in his genes. Back in 1962 on the plains of Africa, Geoffrey’s parents, Valerie and Colonel John Kent, pioneered a new style of luxury adventure travel. From modest beginnings, A&K has grown into a world-wide company offering destinations previously inaccessible to visitors and setting the gold standard for luxury travel in the world today.

A&K’s meticulous attention to detail and creating the best experience possible during the times we have traveled with them has convinced us that we will never travel with anyone else again.

On our tour last June with A&K one our first stops was to historic St. Petersburg, the artistic and cultural center of Russia.

Located on the northwest border of Russia near Finland, St. Petersburg or the German Sankt-Peterburg, was established in 1703 by Peter the Great. Before the Bolshevik revolution in 1917 the city was renamed Petrograd, or “Peter’s City” to erase the German connection. St. Petersburg was the original capital city until the Soviets transferred governmental operations to Moscow 1918. During this long and painful century, the city was once again renamed to Leningrad during the communist years of the USSR, the city returned to St. Petersburg in 1991 after the fall of the Soviet Union.

We are pictured on the bank of the Neva River with the Hermitage Museum across the water in anticipation of the annual Scarlet Sails extravaganza. The White Nights season is the best time to really appreciate the beauty and grandeur of St. Petersburg. Normally lasting from June 11thto July 2nd, it is referred to as White Nights, known as Beliye Nochi in Russian.

This amazing phenomenon caused by St. Petersburg’s very northerly geographical location – at 59 degrees 57′ North, occurs in areas other than St. Petersburg, such as Olso, Norway, Greenland and in some parts of Alaska, but St. Petersburg has enthusiastically embraced the phenomenon with many shops, restaurants and even museums extend their hours to take advantage of the increased daylight.

The highlight of the White Nights celebration is the Scarlet Sails Festival held at the height of the season during the summer solstice. It is a very popular annual event (crowds for 2019 have been estimated at 1,500,000), and takes place on the Saturday closest to the summer solstice, this year it was held on the night of June 21 to June 22. It includes a thunderous, 20 minute, multi-media fireworks spectacle on the Neva River that must be seen to be believed – it is the largest in the world. The free fireworks show, with over 50,000 volleys including brilliant colors along with showers of sparks it is followed by the grandest grand finale I have ever seen. Just when you think the show is over – BOOM it is even bigger than before. I have included the video below, a 20 minute show!

You really have to experience what it is like in an area, in close proximity to the Arctic Circle where during this period the sun never sinks below the horizon, achieving no more than a twilight type of sky for about two hours around 1:00 am. The sun “rises” around 3:00 am and it is daylight once again; the White Nights are a time of celebration and the town of St. Petersburg is vibrant and alive 24 hours a day with festivals, activities, concerts and more.