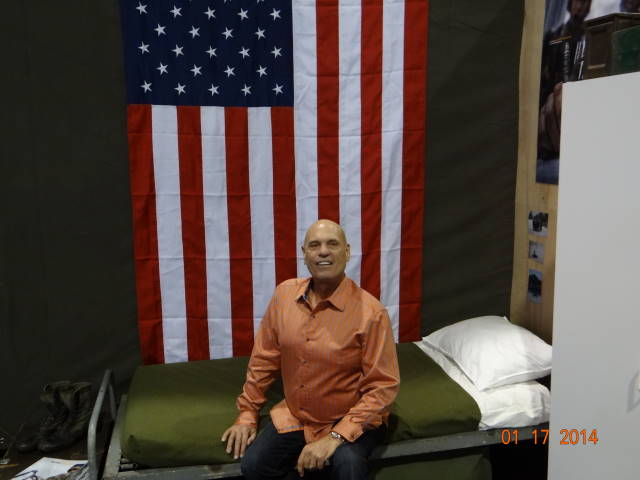 Good afternoon dear readers and welcome back to We The People!  This is Ken Baxter of Las Vegas and today is Tuesday, December 8th, 2015.  I hope you all enjoyed a very Happy Thanksgiving and are looking forward to the rest of the holiday season!  Here at We The People, we believe that as Americans we owe great thanks to our forefathers and our democracy for creating and maintaining a society wherein we have the collective freedom to celebrate cultural and religious traditions of our choosing while many others around the world do not have the luxury.  For those in the world experiencing religious persecution and for all innocent victims suffering at the hands of merciless religious zealots, We The People proudly defends your freedom!

In America the principle of “freedom of religion” is officially protected by the First Amendment to the United States Constitution.  We’re able to practice any form of worship we believe in or not partake in any at all!  In other countries, like Saudi Arabia for example, their laws require 100% of citizens to be Muslim and practice the Islamic principles set forth by their theocratic monarchy.  Other countries, while not officially discriminatory against certain beliefs, make it difficult to practice anything but the norm by banning particular churches or stifling freedom of speech against the nationally “accepted” religion.  In Pakistan, for example, simply uttering a derogatory remark about the Islamic Prophet Muhammad is punishable by death.

Sadly, there are people in the world who take their religious beliefs to an extreme and even do harm unto others who don’t share their faith.  Even though no specific religion, national belief system, or entire country is responsible for the disturbing terrorist activities witnessed over the last few months, we’ve got to understand that there are close-minded people in the world who follow extremist principles and execute violent acts in the name of their faith, leader, or deity.  These are the perpetrators responsible for such savage offenses and they’re not the norm. Unfortunately, it is often free citizens who become the target of these cowardly, psychotic attackers hell bent on making their religious, ideological, and political beliefs known to the world.

Just a few weeks ago in Paris, the Islamic State jihadist militant group ISIS (Islamic State of Iraq and Syria) targeted several shootings and bombings at hundreds of innocent people merely going about their daily lives.  The victims were not fighting anyone or denigrating a religion, they were simply enjoying a dinner with friends, having a drink at a bar, watching a soccer match, or joining their families after a hard day’s work.  Nothing in the world could have prepared them for such an undeserving onslaught of terror when just one day earlier U.S.President Barack Obama assured the world ISIS was contained.

While we received plenty of news feed about the tragic events unfolding in France, there was barely a mention of the lives lost in Lebanon during another incident the day before; the worst terrorist attack on Beirut since the Lebanese Civil War ended in 1990.  The major news networks never seemed to condemn the ISIS group outright; suggesting we’ve become pacified into believing the incidents are now just par for the course. In fact, just last week word spread like wildfire about another possibly ISIS related attack – this time in the U.S. at a San Bernardino, CA disability assistance center. Fourteen innocent people were killed and another twenty-one wounded.   Where is the outrage and why aren’t we taking them to task?

In 2015 alone, there have been over three hundred incidents of terrorism like this committed around the world.  We quietly look on; mourning our losses when they hit close to home while various nations send troops haphazardly here or there, but when are we going to step up and start protecting our people?

You see, ISIS believes in their holy war – the Jihad, or the struggle against non-believers.  To ISIS, most of the world is an enemy for simply opposing their extreme, maniacal religious beliefs.  The so-called Islamic State believes they will have a role in the Apocalypse or the “End of Days”, which in their twisted minds will deliver upon the world the purest form of Islam and a cleansing of the human race.

Sickeningly, their tactics to accomplish the religious piety and perfection they seek includes a malicious massacre of inculpable, ordinary citizens.  The most important thing to remember about these tragic assaults, as devastating as they may be, is that they’re caused by fear-filled, radical hate mongers who are quite simply too afraid or too weak to fight any kind of real battle against us so-called “infidels”.

Their methodology includes torture, rape, beheadings, and suicide attacks – depraved tactics which are an abomination to ANY mainstream, organized religion.  Muslims around the world have been quick to denounce all ISIS actions and beliefs; claiming the extremist ideology they practice is entirely against the peaceful teachings of Islam and their despicable attacks against the innocent are unwarranted and condemned in their faith.

Furthermore, since their most brilliant plan to antagonize peaceful nations is to send egomaniacal, suicidal criminals to bomb unarmed men, women, and children at a sports stadium or a concert hall should be evidence enough that they’ll never succeed in forcing their radical beliefs on the rest of the planet.

Indeed, it is the civilized nations of the world that will make these pitiful wretches pay for their inhumane actions.  In fact, presidential hopeful, Donald Trump, feels the only way to stop these despicable villains is to do away with the politically correct Obama led war on terror and take out the terrorists’ families as well; hitting them in one of the few places that count.  According to Trump, the terrorists use their family members as human shields, protecting and hiding them from prying eyes while blocking would-be retaliation efforts that try to avoid civilian casualties.  Trump’s theory proposes to instead eliminate their cover to get these mongrels out fighting mad, right in the open where we can hit them hardest.

Another effective strategy would be to amend gun control policies and encourage private citizens to start carrying self-defense weapons, suggests INTERPOL,the world’s largest police organization of 190 member countries.  In countries like Switzerland, which has very liberal gun laws, the rates of homicide are extremely low –about .5 incidents per 100,000 inhabitants; and that’s despite having the third highest number of guns per capita in the world.  Unlike most countries, Switzerland has also created a culture of responsibility and safety.  When firearm ownership is rooted in a sense of patriotic duty and national identity, people are more likely to use them responsibly.

Fox News’ Judge Jeanine Pirro concurs, saying we need to “stop pussyfooting around…pull out all the stops, and start fighting for the survival of this country” in her Sunday night Justice broadcast. As part of her five-point plan promoting the safety of all American families, Pirro says we need to “weaponize” our local police departments, close U.S. borders and halt issuance of visas, put an end to refugee resettlement programs, become outspoken when we see suspicious activity, and most importantly buy a gun, learn how to use it effectively, and “don’t let anyone talk you out of it.”

Just think about it, if you are a terrorist you want unarmed citizens.  You want to be able to attack people by surprise with no means of self-defense.  By advocating for private citizens’ gun rights, along with gun safety, education, and training we are furnishing more than just peace of mind; we’re arming ourselves with a network of protected civilians.  Over the past seven years,the NRA’s Refuse to Be a Victim program has helped more than 100,000 men and women develop their own personal safety plan using common sense self-preservation strategies.  These types of educational programs sponsored by gun advocates are a way to ensure responsible gun ownership and the knowledge we need to defend ourselves.

So why shouldn’t we finally start taking our protectioninto our own hands?  As FDR would say, “the only thing we have to fear is fear itself.”  If terrorists are anything, they’re opportunistic.  The more we lay waiting around in fear of the next incident, the better chance they have to make a successful strike.  Yet it seems as if we’ve almost come to accept these events as a part of normal life.  We all go through a period of shock and horror, and then we move on without making a change.  Nothing we have done so far has stopped these random acts of violence from happening over and over again.  No amount of military or government intelligence has thwarted the latest ISIS invasions.  Are we just going to keep biding our time until another September 11th  or worse?  It’s time to lead the War on Terror 2.0 and stop waiting for the next attack.

We The People is dedicated to defending and upholding the rights of all innocent law-abiding citizens, not just in our homeland but around the globe.  As Americans, we stand united against terrorism and proudly support national and international military efforts to defeat our enemies both here and abroad.  We also advocate for private citizens’ 2nd Amendment right to bear arms in order to ensure personal safety in the face of imminent danger.  For more information about our mission, interests, and latest news, please visit us at: www.WeThePeopleLV.com where you can leave comments, ask questions about our stories, or let us know what you’d like us to investigate in our next blog.  We look forward to hearing from you!

Thank you for visiting my blog – Ken Baxter Las Vegas

Newseum – It Will Be Missed