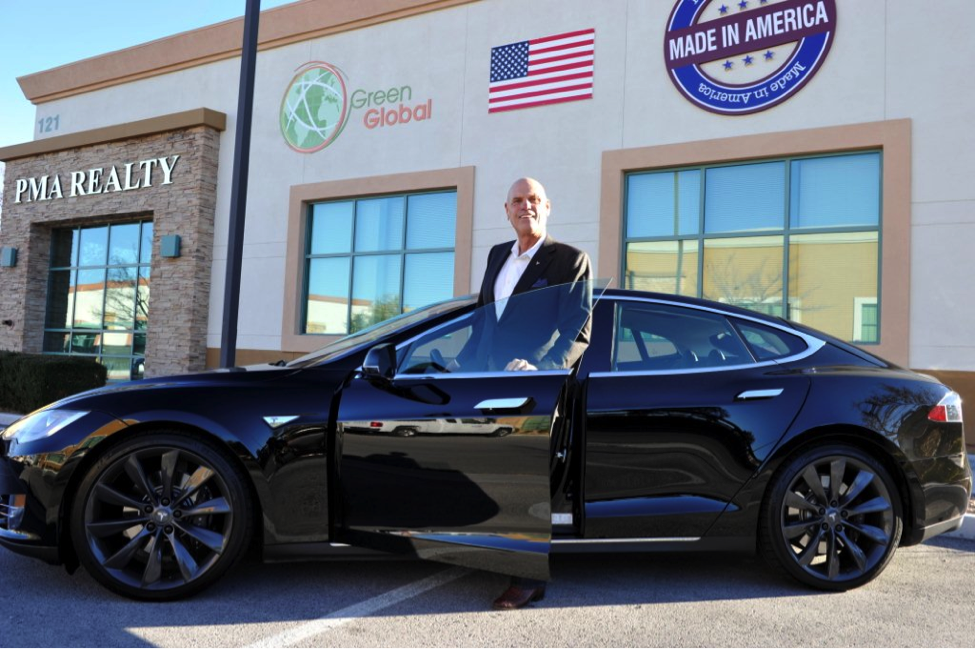 Good afternoon dear readers and welcome back to kenbaxter.com!  I am Ken Baxter of Las Vegas and today is Friday, October 3rd, 2014.  If you have been following Green Global and Made In America recently, you will remember our recent blog posts about the 7th Annual National Clean Energy Summit (NCES 7.0) we attended last month at Mandalay Bay Convention Center.  During the exciting summit, we learned about all the promising opportunities on the horizon for both Nevadans and Americans.  Not only is Nevada at the forefront of clean energy technology, but we are also creating thousands of new manufacturing and technical jobs for Americans due to the specialized research, technology development, and natural resources found right here in the Silver State!

One of the most exciting achievements for Nevada this year has been the announcement from Tesla’s Co-Founder and CEO, Elon Musk, that our state has been selected as the future home of their new $5 billion, five million square foot Gigafactory!  Since Nevada prevailed in the competition against several other states for site selection, Nevada Governor Brian Sandoval joined Mr. Musk on September 4th, the same day as the Clean Energy Summit, in making this special announcement to the world.  “The Gigafactory is an important step in advancing the cause of sustainable transportation and will enable the mass production of compelling electric vehicles for decades to come. Together with Panasonic and other partners, we look forward to realizing the full potential of this project,” said Musk.  In reference to Tesla, Governor Sandoval also added, “These 21st century pioneers, fueled with innovation and desire, are emboldened by the promise of Nevada to change the world. Nevada is ready to lead.”

The really great news is that our state will not only be the recipient of over $100 billion in economic impact for the next twenty years, but also stands to gain over 6,500 much-needed jobs for skilled technical workers in the region, making this one of the most impactful events to occur in Nevada history.  In addition to those 6,500 factory jobs, which reportedly will pay over twenty-five dollars an hour, the Tesla deal will create over 16,000 other related jobs, including 3,000 jobs for construction workers.  This huge employment increase will raise state employment levels by two percent and regional employment by ten percent; a major boon for the Southwest.  Made In America is thrilled to hear that much needed manufacturing jobs are headed our way and is happy to provide assistance in training and education resources wherever we can!

Aside from the many reciprocal benefits Tesla will be receiving from Nevada in the form of tax breaks and other incentives, Nevada was chosen as Gigafactory’s home over other finalists, Arizona, Texas, and New Mexico, at least partially because of their commitment to using locally sourced materials whenever possible.  As you may be aware, Nevada is home to the only operational lithium mine in the United States.  Located in Silver Peak, about halfway between Las Vegas and Carson City, Western Lithium’s mining facility will be expected to provide over 15,000 tons of lithium carbonate to Tesla’s Gigafactory once operations are in full swing by 2017.

You may wonder though, why is lithium so important to Tesla?  The reason is that lithium is the lightest metal on the periodic table while also having a very high energy density.  This allows for the same amount of power to be distributed from a lightweight lithium-ion battery as the heavier, traditional lead-acid battery.  Since Tesla produces sleek, fast, lightweight all-electric motor vehicles, of course a lightweight and efficient battery would be one of the vehicle’s most important components, thus giving the lithium-ion battery the clear advantage.  The Gigafactory, as it is known, will essentially be Tesla’s automotive battery factory, capable of producing 35 gigawatt-hours of lithium-ion batteries per year, more than the combined capacity of all the batteries currently on the planet today.

One of the things Green Global admires most about Elon Musk is his strong commitment to a clean and sustainable energy future!  The new Tesla battery manufacturing center will rely solely on geothermal, wind, and solar power; completely independent from non-renewable sources for electricity, making this a Net Zero energy factory.  Musk and his ever-evolving companies are creating the innovative technologies and business models needed to transition away from global reliance on fossil fuels.  His other notable green endeavor, SolarCity, has become one of the leading commercial and residential solar panel installers, soon to be producers, in the United States.  While others have reigned in their green technology investments, Musk has leapt in with both feet, raising billions of dollars to build the Tesla Gigafactory in Nevada and a new production facility for SolarCity’s high efficiency solar panels and batteries in New York.

So what’s next for Elon Musk and Tesla?  Rumor has it there is a new model in the works!   The Model D, being unveiled to the public on October 9th, should be an exciting new addition to Tesla’s current lineup, the Model X and Model S, of which I am a proud owner.  I have a feeling there will be much more to come from Tesla in the near future. In the meantime, we will be looking forward to the construction of the Gigafactory and the promise of thousands of new jobs for the hard-working men and women of Nevada!

Have a great weekend!

MADE IN AMERICA ATTENDS NWCTA’S STUDENT MEET AND GREET!

SAVING THE AMAZON: THE LUNGS OF OUR PLANET