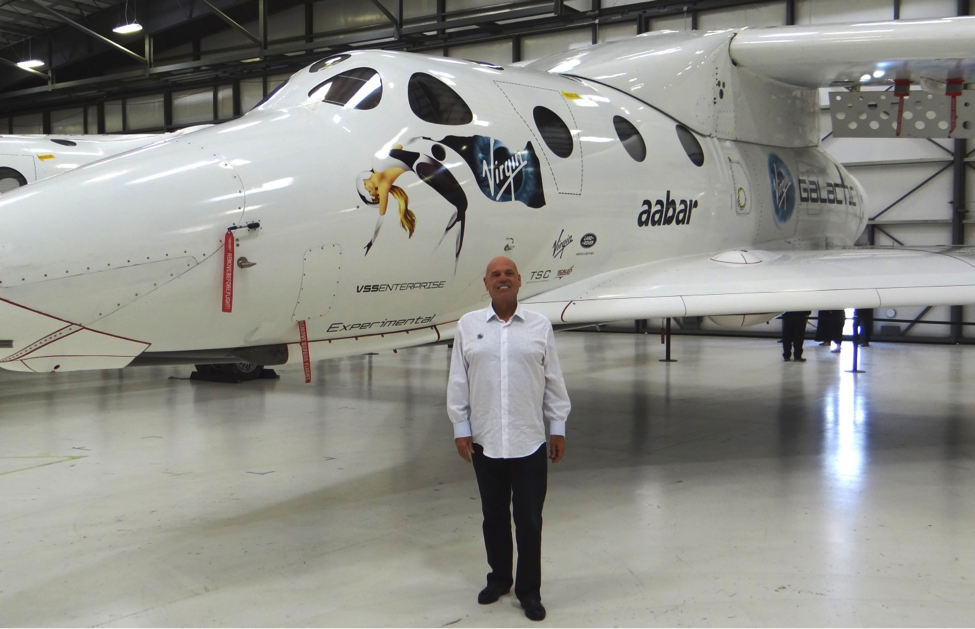 Good afternoon dear readers and welcome back to kenbaxter.com!  I am Ken Baxter of Las Vegas and today is Friday, October 31st, 2014.  Happy Halloween to all the ghouls and goblins out there, and for those of you who live in the Silver State, Happy Nevada Day!  For Nevadans, today is the anniversary of our statehood and this year is a true milestone; the Sesquicentennial – 150 years!  On October 31st, 1864, Nevada was admitted to the Union as the 36th state.  Every year on this day, Carson City, the capital of Nevada, hosts a huge parade and festival, not only to commemorate our statehood but also to celebrate being American!

Speaking of anniversaries, in my last post I let you in on our exclusive First Founders invitation to Mojave Air and Spaceport for the 10 year Anniversary of SpaceShipOne’s historic win of the Ansari X Prize!  Built by the dynamic partnership of designer Burt Rutan’s Scaled Composites and investor Paul Allen’s Mojave Aerospace Ventures, SpaceShipOne was the undisputed winner of the X Prize, a competition designed to test the abilities of revolutionary inventors around the world in building a reliable, reusable, privately financed, manned spaceship capable of carrying three people 62 miles (100 kilometers) above the Earth’s surface twice within two weeks.

The successful win of the X Prize by SpaceShipOne caused not only a surge of public interest in commercial space travel but also gave way to many companies crafting their own space vehicles for private use.  Hugely successful entrepreneur and multi-billionaire Sir Richard Branson, also the visionary founder of Virgin Enterprises, saw promise in the winning team and technology and eventually partnered with Scaled Composites/Mojave Aerospace Ventures to create a second, larger commercial space vehicle; thus Virgin Galactic was born!  Aptly named SpaceShipTwo, the new Virgin Galactic rocket ship was christened VSS Enterprise upon its unveiling in 2009 by then-Governor of California, Arnold Schwarzenegger, and is capable of carrying two pilots and six passengers safely into outer space.

Now, as you may have read in my blog, on the news, or around the web, Rocket Man is preparing to make history as the very first of those ticketed passengers with an upcoming spaceflight on Virgin Galactic’s SpaceShipTwo!  I am also thrilled to report that my flight will be made on a rocket built entirely in the USA with 100% American made parts and materials!  In fact, the second rocket of five in the SpaceShipTwo fleet is nearing completion at FAITH (Final Assembly, Integration, and Test Hangar) located at Mojave Air and Spaceport in Mojave, California – current test flight center and temporary home base for Virgin Galactic.

But that’s not all, dear readers! Sir Richard has declared their world headquarters right here in the Southwest!  The expertly crafted, environmentally friendly Spaceport America has been officially open since 2006, but interior Spaceport construction is not quite finished.  The Spaceport lies low; fluidly melding with the surrounding desert landscape of New Mexico. Using local materials and regional construction techniques, it is both sustainable and sensitive to its surroundings. The first space tourists on Virgin Galactic’s sub-orbital voyages will be among the first to experience the dazzlingly futuristic qualities of the interior terminal and walkway, reportedly through a Star Trek-style sliding portal!

Perhaps one of the most exciting things about Spaceport America is the considerable amount of new jobs it will bring to New Mexico once full operations are underway.  Along with Virgin Galactic, several other companies including SpaceX and UP Aerospace also call Spaceport America home.  In full swing, the Space transportation hub is projected to create several thousand new jobs, both directly and indirectly, for aviation industry professionals and many others based on heightened tourism and interest in the 18,000 acre spaceport.

Situated just 20 miles to the northwest, one small desert town of just 6,500 residents stands to see the most gain due to its’ close proximity.  Truth or Consequences, formerly known as Hot Springs, surprisingly acquired its name from a popular 1950’s radio show in which host, Ralph Edwards, announced that he would air the program from the first town that renamed itself after the show.  Though the achievement brought some brief notoriety, the town’s new claim to fame, nearby Spaceport America, will generate much more interest.  New restaurants, renovated hotels, and many shops and tour companies are either in development or already completed in and around the area.  The future now looks much brighter for this small town and many others in the region!

On behalf of Made In America, and as a future astronaut with Virgin Galactic, I could not be more proud of all the positive change Sir Richard and his partners are bringing to the USA and to the Southwest with Virgin Galactic!  With more test flights currently underway and just a few more months to go until the projected first passenger flights of 2015, a whole new industry is brewing in the USA.  Are you ready for the wave of the future?  Or how about waving to Earth from outer space?  I know I am!

KEN AND LINDA BAXTER OF MADE IN AMERICA TEACH STEM PROGRAM AT WILL BECKLEY ELEMENTARY SCHOOL!

IT IS MY PLEASURE TO INTRODUCE YOU TO LIBERTY HOMES OF NEVADA!