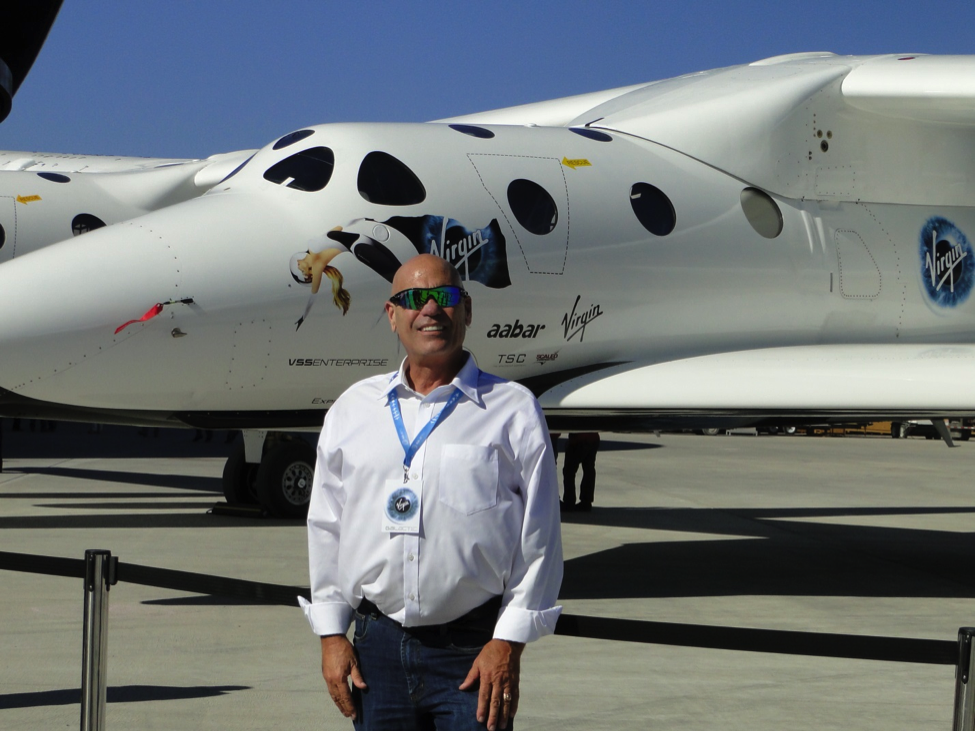 Good afternoon dear readers and welcome back to kenbaxter.com.  I am Ken Baxter of Las Vegas and today is Friday, November 14th, 2014.  It is with deep sorrow that I relay the sad news of Virgin Galactic’s VSS Enterprise demise in the Mojave Desert on Friday, October 31st, 2014.  My best wishes and deepest sympathies go out to the Virgin Galactic and Scaled Composites family and to Sir Richard Branson, founder and fearless leader of the Virgin Galactic team, as well as to the pilots and their families during this tragic event.

On that fateful Friday morning, the SpaceShipTwo sub-orbital space craft, VSS Enterprise, suffered a catastrophic in-flight breakup after co-pilot Michael Alsbury allegedly unlocked a moveable tail mechanism too early in the flight test, causing the feathering system, or air-braking descent device, to fail as it was uncommanded.  While pilot error and possibly other factors may have contributed to the destruction of VSS Enterprise, it is clear that the testing of its new hybrid rocket engine with a specially developed rubber-based rocket fuel was not the cause of the accident.  Shortly after the crash, the engine and propellant tanks were recovered intact, indicating there was no explosion from either component.

Many further tests and investigations will be needed to determine the absolute cause of the crash, but for those of us emotionally invested in the success of SpaceShipTwo’s test flights, the answer is neither here nor there.  It was simply an accident which could not be foreseen.  Despite all of Virgin Galactic’s best efforts to maintain the safety and efficacy of its systems, some incidents are simply unpredictable.  We can only move forward and learn from the events that led to the accident.

As First Founder, I want to personally thank and support the pilots for their bravery and selflessness in commanding the space vehicle during repeated test flights to prevent tragedies such as this one from happening to future passengers.  The pilot of VSS Enterprise, Peter Siebold, survived the crash with serious injuries after successfully releasing himself from the straps of his seat followed by immediate automatic deployment of his parachute.  Tragically, co-pilot Michael Alsbury, was unable to make it out of the crash alive.  We are forever grateful for his ultimate sacrifice.

While air travel in general does not come without risks, space travel can be significantly more risky and requires more thoughtful consideration due to its relative modernity and obvious, inherent dangers.  Much like the Wild West of the late 1700’s to mid 1800’s, the race to commercial space travel has yet to be conquered.  It is the new Frontier, not only for America but for countries all over the world.  Many private companies are vying for opportunities that abound in the outer limits.  Whether their purpose is to shorten flights from one continent to the next, to provide passengers with the ability to achieve weightlessness and view the Earth from above, or to deliver supplies to established space stations, a whole new realm of possibilities are available with the introduction of commercial space travel.  Yet, they may not be attained as easily or quickly as anticipated.

Tragically, just days before the VSS Enterprise crash, the unmanned Antares rocket loaded with almost 5,000 pounds of supplies and bound for the International Space Station, exploded moments after liftoff from NASA’s Wallops Flight Facility in Virginia.  Built and launched by Orbital Sciences, a competitor of Elon Musk’s SpaceX team, the rocket fell swiftly back to Earth in a fiery ball causing all the supplies and the rocket ship to be destroyed.  Thankfully, no injuries or fatalities occurred due to the catastrophic failure of the ship.

In the aftermath of the Virgin Galactic crash, many news and radio reporters have requested interviews from me; wondering why or how I could still want to be an astronaut and especially with Virgin Galactic.  My answer to those questions can be read in my ABC News article: http://www.newsnet5.com/news/national/first-man-to-buy-ticket-to-space-undaunted.  The plain and simple truth is, even in light of the misfortunes of the immediate past, space travel will continue to be a dream of mine.

I want the world to know and to understand that people like me are not going to give up.  If you truly believe in something, despite any kind of setback, you push forward and make the dream a reality.  And so it shall be with my upcoming flight on Virgin Galactic’s second SpaceShipTwo.  Though the flight will not be on the maiden voyage of VSS Enterprise, another space plane in the series is under construction, scheduled to be completed in 2015.  Dubbed VSS Voyager, test flights are anticipated for next summer and with the experience of the first ship’s crash under their belts, safer and more reliable equipment and even stricter test requirements will be at the top of Virgin Galactic’s list.

As you know, Sir Richard and his family will be the very first passengers to take the sub-orbital space flight once testing is completed.  There is not a doubt in my mind that he will make sure to have every component of the space vehicle triple checked and tested for safety before any passengers are allowed to board the ship.  I for one will not be requesting a refund of the very first purchased ticket to outer space and I am very much looking forward to seeing Earth from up above.  I will remain the first space tourist with Virgin Galactic and hopefully many of the First Founders will join me in resolutely supporting the onward progress of Virgin Galactic’s mission!

On a final note, I wish the best of luck to Sir Richard and Virgin Galactic.  To your continued progress and swift recovery from this tragic event; may VSS Voyager carry us all safely to the stars above in the year ahead.